I'm A FilmMaker...
Yep, you read it correctly.  I have now produced two (very) amateur videos.  The first was a test video to see how Windows Movie Maker works and the second was the first in a series I am calling "Cats and Art".  It is essentially to share with the world all the is the wonder and glory of my new sons, George and Seamus.  They are the handsomest cats in life and who knew?  I, Cat Free, would end up being a cat lover.  I grew up with dogs and rodents...isn't that kind of the opposite of cats?  LOL

Anyway, my new favourite hobby is trying to capture some hilarious moments that George and Seamus can't help but produce and let me just say, I'm failing horribly at it.  It's almost as though the men KNOW I am filming them and in response, seldom do anything but look at each other or clean themselves on camera.  I SWEAR they are way more charismatic and hilarious than what has, thus far, been portrayed! 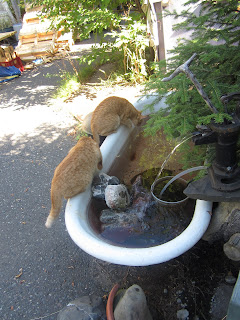 And here is the video of Seamus' world debut on the WWW!!!

Cat Free
Art you can relate to...